The infamous Block 10: An unpleasant memory 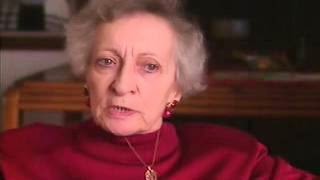 There are millions of stories within the big story (the Holocaust), and within the many stories that my mother told, the most gripping part -- in my opinion -- was about the medical experiments.
Gripping, and another description, disgusting.
The infamous Block 10 at Auschwitz was where Mom (Rozette Lopes-Dias Lezer) was imprisoned for nearly 2 1/2 years and where the Nazis used women, men and children as medical guinea pigs.
Bottom line was this: They tried to sterilize her. They failed. Thankfully. Which is why, after she met my Dad and became Rose Van Thyn, eventually I came into this world and so did my sister Elsa.
"They told us, the women who were there, how fortunate we were to be in this block, to be used for medical experiments," my mother said in the 1996 interview she did for the USC Shoah Foundation. "And in a way, probably we were fortunate because that saved our lives."
If you read on from here, be aware. There are a few uncomfortable moments.
---
In her interview, Mom talks extensively on life in Block 10, where she was known not by name but by the number tattooed on her left forearm (62511). This article will deal only with the medical experiments.
The most famous -- and I use that word loosely -- doctor to work in Block 10 was Dr. Josef Mengele, known mostly for his obsessive (and maniacal) research and treatment of twins and children. But my mother said she never heard of Mengele then and was not aware of the twins research ... not until well after World War II had ended.
The name to remember here -- the one she remembered -- is Dr. Carl Clauberg.
"The Dutch women were used mainly for sterilization experiments and other experiments," Mom told the interviewer. "I had, for example, hundreds of shots in my chest. They didn't tell me what it was and I doubt very much if they knew what it was.
"I gave a lot of blood for the German soldiers," she continued, "because my veins are right on top of my skin, and they really enjoyed doing that."

Interviewer: "Who did the experiments?"
Mom: "Dr. Carl Clauberg. He had done experiments in Raavensbruuck and then he went to Auschwitz and set up this Block 10. ... He had an assistant who in civilian life was a barber. ..."
From the Jewish Virtual Library:
"Carl Clauberg experimented with sterilization in the camp. Part of Block No. 10 in the main camp [at Auschwitz] was put at his disposal. Several hundred Jewish women from various countries lived in two large rooms on the second floor of the building.
"Clauberg developed a method of non-surgical mass sterilization that consisted of introducing into the female reproductive organs a specially prepared chemical irritant that produced severe  inflammation. Within several weeks, the fallopian tubes grew shut and were blocked. Clauberg's experiments killed some of his subjects, and others were put to death so that autopsies could be performed."
---
Here is my mother's recollection of the methods and the results:
"The experiments were (pause) ... were terrible," she told the interviewer. "They had a whole laboratory downstairs where they had renschen (?) apparatus, and they would give us internal shots, and they would tell you the night before. They would come up and they would say, '62511, you can't go out on commando tomorrow because you have to be used for experiments.
"And then they would give you those shots and the doctor would be there, and the assistant would be there, and they would make X-rays, and then they would be upstairs again, and (the shots) were very painful."
The interviewer asked her: "Did you have to undress when they did the experiments?"
Mom: "Ya, we undressed from the, uh, bottom, you know."

Interviewer: "Would you care to describe how the experiments went?"
Mom: "You were put on a regular operation table, and then they would put the renschen apparatus on top of you and then they would give you a shot internally ... in your vagina."
Interviewer: "Do you know what the shot was?"
Mom: "No, never found out. And I still hope that when the Russians got hold of them [the Nazis], that eventually when the wall came down and they found all those records and eventually that they might find out.
"Now, again, we are very blessed. I'm one of the few women who could have children after the war. And I had the same shots. ... I went with other women at the same time and they couldn't have children.

"Then we would go upstairs, and no medicine, no nothing. ..."
Interviewer: "What happened? What did you feel after you ... ?"
Mom: "Oh, burning, pain. I didn't know then because I'd never had children, but it was like labor pains. Terrible. ...  I had three shots, three shots into ... like I said, most of the women, most of those who came out (of the camp) were sterilized, couldn't have children."
---
No reason to think that Mom concocted or exaggerated this story. But Dr. Robert Jay Lifton wrote extensively on  Clauberg in his book, The Nazi Doctors, and here is one section (page 273):
Descriptions by women experimented upon begin to tell us in human terms what Clauberg was really up to: A Czech Jew named Margita Neumann told of being taken into a dark room with a large X-ray machine:
"Dr. Clauberg ordered me to lie down on the gynecological table and I was able to observe [nurse/main assistant] Sylvia Friedmann [described as Clauberg's top assistant], who was preparing an injection syringe with a long needle. Dr. Clauberg used this needle to give me an injection in my womb. I had the feeling that my stomach would burst with the pain. I began to scream so that I could be heard through the entire block. Dr. Clauberg told me roughly to stop screaming immediately, otherwise I'd be taken back at once to the Birkenau concentration camp. After this I had inflammation of the ovaries."
---
The Shoah Foundation interviewer asked my mother: "Why did you keep menstruating?"
Mom: "I don't know, my body probably was so healthy. I don't know. There were more women who kept menstruating. Not a whole lot ... Two other women were pregnant and gave birth. Same way."
In addition to these experiments, and the shots she received in her chest ("every four weeks or so, ten at a time; altogether about one hundred shots") and the blood she gave ("I don't know how much ... but a whole lot ... about every five weeks"), there was this ominous threat.
"They had trucks lined up twice to take [people] to the gas chambers because of sabotage in the block, sabotage in the sewing room," she remembered. "We were put out, outside the block and they would bring trucks. Commandant (Hess) would come in and say, 'Let the rabbits go back in the block." Yes, they knew it was Hess: "We knew him. He came in quite often."
And so the interviewer asked, what else going on in this block?
"Strange things," my mother answered. " ... People would disappear and never came back. We didn't know where [they went]. Only thing we could figure they were going to the gas chambers."
Posted by Nico Van Thyn at 1:11 PM