We were pleasantly surprised last week to see Mom's picture on the Amsterdam page of the U.S. Holocaust Memorial Museum web site.
My sister Elsa, researching in advance of training to become a docent at the Holocaust museum in Cherry Hill, N.J., found the photo by Googling "Amsterdam" and "Holocaust." 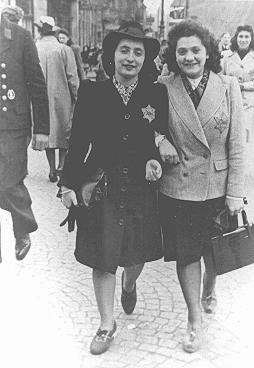 The first link is ushmm.com, and it had this photo caption: Rozetta Lezer Lopesdias-Van Thyn, left, and a friend, with the compulsory Star of David on their clothing. Amsterdam, the Netherlands, May 1942-1943.
Hey, Mom.
I posted on Facebook and sent e-mails  telling of the photo with the link to the page. We received many nice comments in reply, and we appreciate that.
I have a few details to share, answers to some questions I received, and a quote from Mom about wearing the yellow star, which is the significance of the photo and -- although I did not receive verification in a message to the Holocaust museum -- almost certainly the reason it was selected for that page.
It is touching -- two young Jewish women, wearing that star, posing happily, not knowing of the horror that was ahead.
Among the comments we received was "amazing" and "you must be proud" and "were you aware that this photo existed?" and "who was the other woman?"
(Some thought that might be my mother's older sister. It is not.)
Yes, it is amazing. Yes, we're proud. Yes, we have seen the photo before. It is here in our album of dated Van Thyn and Lopes-Dias family photos; in fact, when I went to look for it earlier this week, it was on the very first page.
On the bottom of the photo, Mom had written "Amsterdam, 1940." So that is a discrepancy from the museum-page caption ... and it's not the only discrepancy (see below).
Also, I felt that I had seen the photo published previously -- and I found it. In I remember the difficult times ... (subtitle) World War II recollections from Shreveport, Louisiana, Chapter 7 is entitled "It's The Best Country In The World." It's the story, Holocaust-related, of Louis and Rose Van Thyn.
(The book, published through the R.W. Norton Art Gallery and written by Gary D. Ford with Phil Lynch -- director of the Oral History Project -- as the interviewer, was graciously sent to us by former Centenary College President Dr. Donald Webb.)
There are four family photos included in the chapter, and this photo is on page 93 with this caption: "Jews had to wear the Star of David. Rose Van Thyn, left, walks arm in arm, with her friend, Lena Green, as they enjoy a stroll in Amsterdam in 1941. 'Lena, Rose says, did not survive the concentration camps.' "
That is a tough last sentence.
Lena Green: one of the six million Jewish Holocaust victims.
We are certain that Mom provided the family photos for this book, and I am fairly certain (but not verified) that she provided the photo for the U.S. Holocaust Museum.
Several people noted how beautiful Mom looks in this photo. She is about 22 (if it is 1941) and while later in life she would have laughed at being called "beautiful," I think it is one of the best photos of her.
---
In her 1996 interview on the Holocaust for the USC Shoah Foundation, Mom talked about the yellow star and I find it significant that she refers to being "marked," which is also the term Dad used in his interview when asked about having a number tattooed onto his arm.
The interviewer asked Mom: " Do you remember the first time you put the yellow star on and you walked out on the street?"
"I sure do. I sure do," Mom answered. "And I felt almost inferior, I really did. This was ... I was marked. ... The Jews in Holland had been regarded as first-class Jews. I mean there was no job you couldn't get. Every job you were capable of doing -- in government, city or state government, you could get. [When the Nazis took over] this was over with, and you felt mistreated.
"It was terrible."
Interviewer: "Did it create fear?"
"Oh, absolutely, absolutely," Mom said. "Not as much as that we would eventually leave Holland, but still, you were marked. In the neighborhood, [it] was at least 75 percent Jews, [and the Nazis] started having raids. ... We lived on a main street, and there was a highway and they would put up barricades and they would stop all the people wearing Star of Davids and ask for your ID because on your ID you had a 'J.' People would say to me, 'Why did you get a 'J' on your ID?'

"But it was really too dangerous not to [wear it] because when the Germans came in, they went to the City Hall and to the Jewish Community Center in Amsterdam ... so they had all the lists of all the names and if they would stop and you were not wearing your Star of David or (didn't have) your identity card with a J, you would go to prison.
"[We were] not even thinking yet of a concentration camp."
In her interview, Mom talked about "no rational explanation" why she survived the concentration camps and so many -- including most of her family -- didn't and she cited one neighborhood raid when the Nazis were arresting people.
"They stopped all the people with a Star of David," she recalled, "and I walked through. They never stopped me. I walked through and the [German] soldiers were there, checking people. I walked through without ever being stopped. That's not by accident you know. This, for me, was a sign, really."
That was one day of survival. There were many more, even through her two-plus years of captivity in the camps and the woods of Poland and Germany.
---
In the caption on the U.S. Holocaust Museum page, her name reads Rozetta Lezer Lopesdias-Van Thyn. Let me explain and confess.
Lezer was her first married name. Lopes-Dias -- two words, hyphenated, not one word combined -- was her maiden name. She never used Lopes-Dias and Van Thyn together. And her first name was Rozette, not Rozetta.
The confession: In her obituary, I mistakenly wrote it as Rozetta. She always pronounced it that way, and I assumed that's how it was spelled. It was one of the worst cases of checking-the-facts in my life. Found it a few days later as Rozette on her U.S. citizenship paper. 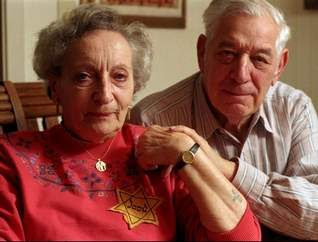 But there is Rozetta again. Maybe they got it from the obit.      Mom kept a yellow star at home, through the post-war years in Amsterdam and then Shreveport. I don't think it was her original yellow star -- don't see how that's possible -- but it was a replica.
Mom wore it for a 1995 photo with Dad to accompany a story in The Shreveport Times. That same photo was part of The Times editorial page column entitled "Van Thyn's work must continue" two days after Mom passed away in 2010.
The yellow star: a haunting memory. But Rose lived to show it off for decades long after she was forced to wear it.
Page link: http://www.ushmm.org/wlc/en/article.php?ModuleId=10005434.