Testifying against a Nazi guard 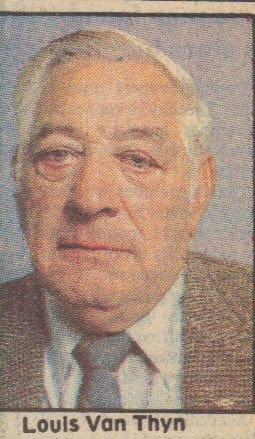 (20th in a series)
Because the previous chapter in this series of my father's World War II/Holocaust experiences dealt with the guards -- SS and others -- the Nazis used to watch over and often harass the prisoners in the concentration camps, this chapter is in the same vein ... but it deals with a trial many years later.
In his 1996 interview with the USC Shoah Foundation, Dad (Louis Van Thyn) talks a few minutes about going to then-West Germany in April 1986 to testify against a Nazi prison guard accused of shooting 15 to 20 prisoners on the famed "Death March."
I have written about this previously -- August 2012 -- before I began this series, which is about my Dad's life but centered around his Holocaust interview. I am re-visiting the subject because it now fits into the series.
Here is a link to my previous entry about the trial: http://nvanthyn.blogspot.com/2012/08/dad-takes-on-nazi.html. And here is the link to two stories written in the Shreveport Journal, one before Dad's trip and one after his return:  http://nvanthyn.blogspot.com/2012/08/a-trial-in-germany-two-stories-1986.html.
In his Shoah Foundation interview, Dad offers a little more explanation of the events.
---
The background: Late in 1944, as the Russian armed forced advanced toward Germany and Poland (where some of the prominent concentration camps were located, including Auschwitz-Birkenau, where my mother and dad were), it was becoming evident that the Nazis were losing control.
They abandoned many of the camps, but not before forcing the prisoners -- mostly Jewish -- on "Death Marches," making them walk for miles and miles and days and days to other camps and who knows where.
My mother and her companions, for instance, after a couple of weeks wound up in the middle of forests where the Russian army found them, starving and in pitiful health.
A couple of accounts I've read said there were some 60,000 Auschwitz-Birkenau prisoners forced on the "Death March," and that some 15,000 died before they could be rescued by either Russian or American military.
My Dad did not go on the Death March. He was among the really fortunate prisoners, if you consider being in a camp hospital fortunate. In this case, it was.
Because he had made a mistake on an assigned task counting prisoners in the Auschwitz satellite mine-work camp of Janina, an SS guard had attacked him with a hammer, struck him in the elbow and caused enough damage that treatment was necessary in the hospital.
There were 27 men who were left in that hospital when all the other prisoners in camp were marched out. And the Nazis bailed out, too, at Janina -- another piece of good fortune.
Here is what Dad remembered as he brought up the trial in Hannover.
"Well, two come back [from the Death March], a father and son," he said. "We had carbide light in the coal mines, they were repairing that all the time. They come back in the camp and say everyone was shot. We no believe it.

"That was 770 people. They were all shot over there."
---
Dad's journey from that hospital camp and his long route home -- although "home" was nothing like it had been before -- is still to come in this series. But he must've spent years, decades, thankful for escaping the Death March and wondering if the horror stories were true.
And 40-plus years later, the German government contacted him about a trial for Heinrich Niemeier, the guard on trial for randomly shooting prisoners on the Death March.
"I find that out in 1986," he said in his interview. "I got a letter from the German counsel in Houston [asking] if I was willing to come to Germany to [be a] witness because I was in the camp Janina. They were trying to find witnesses, and they go all over the world [seeking] witnesses from the 27 (in the camp hospital).
"But nobody had seen this. They found one of the guards [Niemeier] who did the shooting, and they got him in jail over there, and they try to find out, and they nimmer [never] find out who did the shooting. The Germans weren't talking.
"I was for two weeks in Germany in 1986, and I witnessed a couple of days over there, and it was over."
Actually, although he had been given the guard's name when the German government contacted him, part of Dad's frustration before the trial was the scant information he had.
"And you know how I find out [what the trial was about]?" he told the interviewer. "I don't know why I had to go over there."

Steve Norder, who did the stories for the Shreveport Journal (where I was executive sports editor at the time), had sent letters to the judge in Germany seeking information. But by the time he received a reply, Dad was already on his way to Hannover.
"I had a sister-in-law [his first wife's sister, also a Holocaust survivor] in Amsterdam and she was real close with that organization there [the Dutch Auschwitz committee]," Dad said, "and I call her and I say I want to know what's going on.
"She said, 'Where are you?,' and I say in the Holiday Inn in Hannover. And on Sunday afternoon, there was a letter for me from my sister-in-law, and she gave me all the information I need.
"I could not find that over here [in the U.S.]. We called the Wiesenthal Center, we called New York. Nobody knows, nobody was interested. Nobody was interested. The Dutch Auschwitz Committee found everything out in two days."
---
The interviewer: Was it established who did the shooting?
"No, they never find out exactly what happened," Dad answered. "They know they were shot in the woods. Now I don't know who was looking after that -- the German government or what -- [but] I was in [Hannover] Germany and the day before the trial -- it was a Monday night -- I was invited by two German policemen. They had a friend here in Shreveport; he was a German military policeman [and] he was a policeman here. He was 18 when he immigrated and became a military man and was sent back as a policeman because he spoke the German language. He connected me with these two German policemen. One picked me up at the airport and took me to my hotel.
"And the night before I had to go to court, he said, 'Now listen, you know that German is an old, sick man. He maybe have do it, maybe not, but I think he is too old to be on trial. You know that was somebody [who was] against the Germans, but he was a policeman.
"The lawyer from him [the defendant] the next morning come to me, and he was real nice, real friendly -- I didn't know who he was, but I find out later it was his defense lawyer. He asked me if I recognized him, and I said no."
---
And here is where I enter the story because Dad then tells the interviewer: "My son said go [to Germany] say yes [that he knew the defendant]. I cannot do that."
(I don't remember telling him that, but I don't think Dad made it up.)
"It was 40 years, 40 years later, and they let me see all kinds of pictures [of the SS guards, including Niemeier]," Dad said. "I tell them all the information I had, and the judge told me later on -- there were seven judges over there, you know the court in Germany is different than from over here -- he said, you know the names from these. I say I know the first names, but nobody introduced me to him, to the German army. And [the judge] laughed.
"But I knew exactly who some of them were -- I say that was the block fuhrer, that was the [overseeing] fuhrer. But I don't know no names. I saw the pictures from the time they were in German [army] clothes. ... I recognize them, but I don't know no names. And I don't recognize that guard."
The interviewer: How many witnesses were there?
"They said there were about 20, but every time somebody else. I got a second letter -- I have it here in my cabinet [at home], [asking] that I had to come back over there."
---
The interviewer: Was Niemeier convicted?
"No, he was not," Dad answered. "No. He was convicted before want [because] he killed an Italian doctor. So he was [already] eight years in jail.
"And he was not sick at all. He looked real healthy because I saw him sitting over there. He was healthy."
Posted by Nico Van Thyn at 3:14 PM