A Rose for Centenary's rose garden

This is a promise kept. My mother, Rozette Lopes-Dias Van Thyn, is now a permanent part of Centenary College's rose garden.
Before she passed away, almost three years ago, we promised Mom -- Oma, as the grandkids called her -- that she would be memorialized at the college she grew to love.
The plaque is in place. On a beautiful Sunday morning with Centenary's garden in full spring bloom, Beatrice and I dedicated it.
My thought was "ashes to ashes, dust to dust." That's adapted from Genesis 3:19 (yes, I had to look that up). 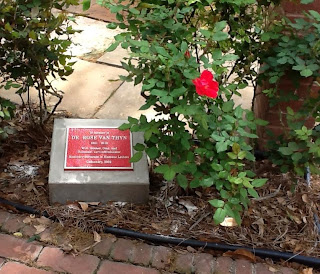 And in the area where it's located, under a gazebo, one -- and only one -- rose was in full bloom, right next to the plaque. How appropriate.
In her obituary -- she died June 27, 2010 -- we had promised to honor her with a plaque at Centenary, where she and my Dad visited often with students as part of a Holocaust study class, where her memorial service was held and where the Van Thyn Endowed Professorship Chair for Holocaust studies was established.
We thank campus officials -- especially David Henington, Centenary's director of planned giving -- for getting this done.
We think Oma would have liked the plaque because it has a red base and gold lettering. It's a bit gaudy, and often so was she. She was bright, and she would wear bright colors.
The wording on the plaque is similar to that as the plaques on the memorial benches at LSU-Shreveport honoring both my parents. This one reads:
In memory of
DR. ROSE VAN THYN
1921-2010
Wife, mother, Oma and
Holocaust survivor/educator"
Honorary doctorate in Humane Letters
Centenary, 2002
As I've written before, my mother spent more than 25 years speaking to groups -- students, church, civic organizations and, most notably, Shreveport-Bossier's annual Holocaust Remembrance Service -- about her and our family's experiences in the Holocaust and about the buildup to and aftermath of World War II.
This week, for the first time, I will be speaking to a class -- at Ferguson Junior High in Arlington, Texas -- about the Holocaust.
I'll try to do justice to what my mother was always trying to say: That tolerance for other human beings is one of life's most important elements; that cruelty, in any form, is unacceptable.
That, God forbid, the horrors of the German occupation -- and the concentration camps/mass murders -- not happen anywhere, to any people. And that when they do -- and there is still suppression and total disregard for human life in several parts of the world today -- they are unacceptable.
No way will I have as much impact or be as insightful as my mother was on this topic. But I've done some reading and studying in preparation, and I've listened to a tape of my mother speaking.
I'll try to do the best I can.
And I'll be thinking about Mom, just as Bea and I were Sunday morning. We preceded our visit to this year's Holocaust Remembrance Service with a visit to Centenary's rose garden, or in this case Rose's garden.