(Second in a series)
For two years and three-plus months, Louis Van Thyn ceased to be, but in name only. He was known as No. 70726.
It was tattooed right there on his left forearm. It was his "name," according to his Nazi capturers. It was how he identified himself to them almost every day.
For the rest of his life, 63 years, my dad had a permanent reminder of being a Holocaust concentration camp survivor. And as it was with all Holocaust survivors, it was a prominent reminder. It was very much a symbol of oppression.
It's not unusual for someone who knew my father, or met him, to recall that the number was one of the first things they noticed. 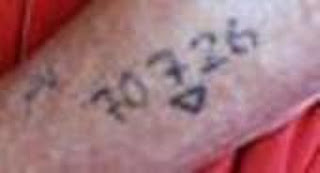 As the Jews came off the trains and into the camps -- in my Dad's case, Birkenau -- they were ordered to take off all their clothes, they were shaved of all body hair, and the numbers were tattooed into a forearm.
Dad described this in his 1996 Holocaust testimony for the Shoah Foundation, rolling up his sleeve when the interviewer requested he do so.
But the number wasn't the only mark on his forearm. He pointed to a mark just to the left and above the number.
"They started here, and they made a mistake," he explained. "Thus, they start over again and they put that number down. It's not a small number, too."
The interviewer asked him to say the number. He answered in English, then added with a laugh, "And I cannot say it in German no more. I say it so many times, but I forgot now."
Below the number is a triangle. The interviewer asked him if he knew what that meant.
"Yes," he replied, "that meant you were Jewish. There are many people who say they were in Auschwitz, and I say what is your number, and they say we not have a number.
"That is not possible. You have to have a number if you were in Auschwitz. There is not one Jewish man or woman that stay in Auschwitz that does not have a number."
What did that number mean?
"They [the Germans] used that instead of your name," Dad answered. "You not had a name anymore, you had a number. That is all that they asked you for, your number."

Do you remember what you were thinking when they were putting your number on?
"Now I'm thinking it looked like [we were] cattle," he answered, laughing. "Now I'm thinking that. Many years after that, you think that. You was not normal no more in the camp, nobody was normal anymore in the camp."
People who weren't in the camp, he added, "they not understand that."
---
But here is what Louis Van Thyn's kids understood from the time they were little: That number on his arm, and the not-as-large number (62511) on my mother's arm were not normal. They stood for something, and it wasn't a nice reminder.
At Dad's memorial service -- Aug. 29, 2008, two days after his death -- I made a reference to him sometimes using the number to his advantage. Say if he were in a long line at customs on an international trip, he might make sure that the customs agents noticed the number on his left forearm and give him a break to move through the line more quickly.
I said that in a light moment, trying for a laugh -- and maybe Dad would've laughed about that, too. I do remember him talking more than a few times about people asking him about the number.
It was no joking matter, though.
No. 70726 was basically a kind, non-aggressive, generous man. A proud man. He proved long, long ago that he was tough enough and that he knew how to survive.
And he wasn't just a number. He preferred to be called Louie.

Next: Beaten but never defeated