Dad's stories are unreal ... and too real

I spent time with my dad this week. It was long overdue.
He told stories, stories a Holocaust survivor could tell, stories -- honestly -- which I did not remember hearing before.
I saw them on tape this week, a tape he did 16 years ago as part of the Shoah Foundation testimonies by Holocaust survivors. 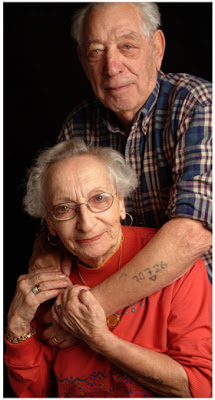 I had seen bits and pieces over the years, but never was I able to watch the whole 2 1/2 hours. I know I should have. But it was too raw for me before, too emotional.
Same with my mother's tape for the Shoah Foundation. But I'd seen many talks and interviews she'd given in her 25-year role as a Holocaust educator in Shreveport-Bossier, North Louisiana and beyond.
She was acclaimed, and rightfully so. Her presentation was compelling, riveting ... awesome coming from this little woman. But my dad, who didn't speak English as well and didn't talk much publicly, told better stories in private -- in my opinion. I've written that before.
This taped interview -- one of some 20,000 done in the United States and some 52,000 worldwide (56 countries, 32 languages, according to the University of Southern California Shoah Foundation web site) -- confirms that.
I am writing this piece at this time because Centenary College on Monday will have its annual Van Thyn Memorial Lecture, part of the endowed chair established there in honor of my parents.  It was a great honor for them, and it is for our family.
A year ago, almost to the day, Centenary had an all-day showing of my parents' testimony tapes.
I intend to watch my mother's testimony, too, in the near future. But this week it was good to visit with the man our grandkids came to know as "Opa."
---
Interviewer: Why don't you describe how you arrived to the station, and what happened from that moment on.

Dad, shaking his head and taking in the question: "Boy, that is something. [Pause]
"We got off the train, and the SS guards came out with dogs and everything. They told us to leave our suitcases and stuff lying over there. We can get it later, they say, and you know it was all in German, and German was not the main language for us. So the half we didn't understand what they were saying.
"They were hitting [people] already, and we were sent to barracks. And we saw the children and the women on the side. It was like a dream. I don't know if you'd say it was a dream, but it was something ..."
---
For those who don't know, my parents each spent about three years in Auschwitz, perhaps the most notorious of the German concentration camps. Each lost all of their immediate families; each lost their first spouse.
They never hesitated to talk about being Holocaust survivors; some survivors couldn't deal with that.
Privately, my mother suffered great periods of guilt and depression. I'm sure Dad had some deep wounds, but he was always even-keeled -- and fairly unemotional -- in discussing those harrowing experiences.
So it was on this tape. No tears, no anger. Only a few times, when something affected him deeply, he softly said, "That was something ..." or "that was bad."
The testimonies were taped Oct. 9-10, 1996, in the living room of my parents' home in South Broadmoor. They sat in the "throne" chair with the portrait of an old Jewish rabbi with a big white beard hanging nearby ... the chair and the portrait are now in our apartment living room.
Both parents' testimonies took five segments.  The interviewer was Renee Firestone, herself a Survivor who is, to this day, a well-known Holocaust speaker in the Los Angeles area with her own interesting blog ... http://eng495renee.blogspot.com/
She guides Dad from his childhood, his life with his parents (Nathan and Sara) and his two brothers (Hyman, two years older, and Jonas, 12 years younger) through the pre-war years and then the lead-up to his being picked up by the Germans.
One touching, and interesting, part is about the number on his arm: 70726. It, not his name, became his identity to the Germans. Of course, this number is what so many people noticed later in his life; it was large -- he says that -- and prominent, and so much a symbol.
---

More on his arrival at Birkenau ...
Interviewer: What did you think, why were the women and the children on the side?
Dad: "No idea. No idea. We were talking, 'What is here?' What did we know about concentration camps at that time? We had heard and read from it before the war, what happened in Germany, maar [but] you no realize that happened today to you yourself."
---
This is not meant as a slight to my mother, but my father's background and experience had him much more prepared -- if that's possible -- for what was to happen in the camps.
My mother often said she was "very spoiled and very overprotected" as a child and naive as a young woman. She'd rarely been out of Amsterdam, she'd worked only as a seamstress.
My father left home at age 17 to learn the diamond-cutting trade in Antwerp, not to return to live in Amsterdam until 10 years later after he married my mother (he wanted to live in Antwerp; she didn't).
You listen to him tell of the many jobs he had -- before the camps, during the camps (cutting trees, in the coal mines, railroad worker, in the streets, in the tailor shop, concrete carpenter) and afterward when he found he couldn't sit inside and be a diamond cutter.
And his route to and from Auschwitz -- to Belgium, to France, to Germany, to Poland and through several work camps around Auschwitz, to Romania, to Odessa, Russia, back to Paris and then Antwerp and Amsterdam again and a job as a street-car conducter, then driver. That's how I first remember him.
Then to the United States and a job as a pipeyard foreman ... a job entirely foreign to him (pun intended).
---
Dad: "Eight people tried to escape from the camp, and they catch them. That was the second or third time that they did that. And they hang them, and the whole camp had to look how they hang. They had to stay there for six or eight hours, and they hang them. It was an example for the Germans to let [us] see how they handled the people."
Interviewer: What did you think?
Dad: "What do you think? They scare you to death. You know they used things to let you see that you were scared."
---
The tape is rolling and I'm taking notes, and it's not easy. It's nostalgic hearing that voice again, and watching him calmly giving the details. He's not animated, and he's sharp.
He was 76 then; he would live another 12 years. There are specific dates and specific places, and as I fact-checked some of the places (to get the spelling), his memory is accurate.
To the end -- Aug. 27, 2008 -- his mind, and his stories, didn't waver.
---
Dad: "Now I was picked up in Auschwitz one time. I had 25 [lashes] on my behind. We were walking in a field and I stole two tomatoes, and somebody catch me. Back in the camp, I had 25 on my behind with a rubber hose. If one man did it, it was bad, but two men was much worse. I was all black and blue; they had a special chair to do that [whipping]."
---

Bea comes back into the apartment from a workout, and hears Dad on the tape. She chokes up. "My heart jumped a little hearing that voice again," she says.
Bea has watched his testimony several times; she watched it with Dad. She had questions, and he always had answers. I have written that one regret is that I cannot ask my Dad more questions about this, and other matters. But at least by watching this tape, I made some discoveries.
---
Dad: "I had still my belt. We had to take a shower every day. Not hot, but a cold shower. ... My shoes they'd stolen already, long time before. Thus I took a shower, and I had no clothes, and they stole my belt, too. And I was crying like a baby. That was the only thing that I got from my own nog [still]."
---
Anyone who met Dad can tell you that he could be hard to understand. He had his own version of English, with Dutch words mixed in often, and he had a thick accent that maybe only Dutchmen could figure out.
Here's what I noticed when we went back to Holland in 1991 (my first trip back): After many years in the U.S., he mixed in English words with the Dutch. Even his old friends back there had to laugh at that.
---
When the satellite camp where he was imprisoned was liberated by the Russian Army, dad and others stayed there for nearly two weeks.
Dad: "Where could we go? We didn't know where to go. We no spoke the language. We don't know where to go. Where do you have to go? You never been there before in your life."
---
At times in the interview, Ms. Firestone can't follow Dad's story. She's distracted because he jumps 10 years ahead or takes a side route while telling a story. So her questions take a circular route. Honestly, I get lost, too, and I listened to him for 61 years.
It's funny, but also difficult if you're trying to piece together the whole story.
---
Coming back to Amsterdam for the first time after the war ...
Dad:  "... I came into Amsterdam on Saturday night, and I don't know where to go. That was bad. You know I come to a town where I was born and raised on a Saturday night, about 9 o'clock, 10 o'clock, and a man said, 'Where are you going?' I say, 'I ... don't ... know.' "
---
Can't tell you how many times this week, while watching the tape, I said to Bea, "That's incredible." Or "he was incredible" ... "That's amazing." And "he was quite a guy."
There were some tears, especially when he talks about his family, and the loss, and he really can't go on, or doesn't, because -- Bea and I believe -- it was just too painful for him, and either he or Renee change the course of the interview.
I miss him; I really do. I was never respectful enough, caused him too much grief. But, fortunately not anything like the kind of grief he'd experienced in the 1940s.
There is enough material here for countless blog pieces. Because several people have suggested to me when I previously wrote about my parents and the Holocaust that I write more on them, that's what I intend to do over the next few months.
Dad's stories from that tape should be a part of this blog for his grandkids and great-grandkids and his many friends to see.
---
A day or two after returning to Amsterdam ...
Dad:  "Then I went to see my old neighborhood over there, and that was something. ...  THAT was bad. That was real bad, you know. The first night I stay in my own bed weer [again]. That was bad. Nobody around. You know that was a bad time for me. ... "