Dad takes on a Nazi 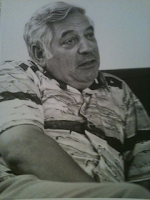 OK, the headline might be a little misleading. My dad didn't really take on a Nazi. But in 1986, he did go to West Germany and -- reluctantly -- testified against an already once-convicted Nazi SS guard.
The German government had gotten his name as a former concentration camp/labor camp prisoner and called him, asking him to testify in a murder case against Heinrich Niemeier, who was accused of shooting 15 to 20 prisoners during a death march.
Dad told them that, yes, he knew of the death march, but he had no memory of Niemeier. He didn't feel like he'd be of any help in the trial. They told him to think about it, and they'd call again.
They were offering a free trip -- all expenses paid -- to Hannover, West Germany. But as I recall, he was hesitant.
Still, after a short time, and considering that he could take a side trip to see our family's friends still in Amsterdam, he said, what the heck, and agreed to make the trip. Free always did sound good to him.
He was one of 85 people from six countries -- including Canada, Israel and the U.S. -- to testify in this trial.
I had nothing to do with this, but the Shreveport Journal -- where I worked then --  ran two stories on his trip, one before and one after. They were written by our old friend Steve Norder, who with wife Lois just left the Fort Worth Star-Telegram.
The first story, on March 20, 1986, ran across the top of Page One, with the headline, "Survivor travels to Germany for trial of SS guard). The second story ran on April 12, headlined "Van Thyn's testimony helps German war crimes case."
(For those interested, I will link the entire stories in a separate take on this blog.)
---
My dad wasn't the vengeful type. He was, for all his wartime experiences, one of those optimistic people, able to see the bright side. When I watch the tape of his testimony for the Shoah Foundation's Holocaust Survivors Film Project -- some 4,200 testimonies -- I am reminded of this.
(And I can tell you it isn't easy for me to watch it, still. He will have been gone four years on Aug. 27.)
I'm not saying he didn't have prejudices. Nothing German pleased him.
He was not about to ride in anyone's Volkswagon, not coach Ellace Bruce's at Oak Terrace Junior High and not coach A.L. Williams' at Woodlawn High. A.L. used to tease him ("c'mon, Louis, let's go for a ride.") When Bea and I first married, we had a cocktail table with German wine labels on it. He strongly suggested we get rid of the table. We did.
He wasn't going to use any German products if he could help it. He never rooted for any German sports team, I know that. And I'm wondering now, knowing how much he loved basketball and loved great players, how he would feel about Dirk Nowitzki, knowing that his daughter-in-law is an ardent Dallas Mavericks' fan.
I suspect he might've made an exception for Dirk, and for Beatrice.
But testifying against a Nazi SS guard he really didn't remember didn't thrill him.
I know that Steve Norder's story says he was anxious to go to Hannover ("I want to see this man to see if I recognize him. I did not go on the death march, but if this man was at Jajina -- a labor camp in Poland -- I want to see him.") But my recall is that he wasn't that eager to do it.
---
Dad had only one physical scar, a nice-sized one on one of his elbows. Mental scars? Who knows; he kept them well-hidden.
The scar on his elbow came when a German SS guard beat the hell out of him, for stealing a potato is the way I remember the story. Another beating he took probably saved his life.
"If an SS guard had not hit me with a hammer, I would have been out on that [death] march," he is quoted in the 1986 story."
Instead, he wound up in a camp hospital. When other men were taken on the death march -- including two of my dad's best friends, one of whom had been in his first wedding before the war -- the prisoners in the hospital were left behind.
Soon the Russians came in to liberate the camp; dad actually wound up on a ship that carried him and several others to Russia. Long story, probably for another blog.
Dad told Norder that at the trial he "did tell them about the work camp and identified some of the SS guards who were at the camp. The chief judge said I gave more information than any previous witness."
But about the man on trial ... "I tried to see something in Niemeier I could recognize; I could not identify him. During the whole time, he never looked at me."
And I have to laugh when I read this paragraph because it shows how matter-of-fact my dad could be. "Once the defense attorney found out I had not gone on the death march," he told Norder, "he was not much interested in me."
Dad might not have relished being part of this trial, but in my opinion, it was -- even 40 years after the fact -- an interesting twist. And for Dad, any chance to go back to Holland for a visit was a good one.
Posted by Nico Van Thyn at 8:38 AM