Coenraad Rood was a survivor, in many, many ways.
He was a Holocaust survivor, like my parents. He spent three years in 11 different German labor camps. He lost almost all of his immediate family in the concentration camps, then returned to Amsterdam after World War II. He tragically lost a little boy. His first wife died only two years after they came to the United States with their daughter.
Coen just kept putting his life back together. He died last Oct. 1 at the ripe age of 94, a longtime resident of White Oak, Texas.

He was "Ome Coon" (Uncle Coon) to us. He was one of the most interesting, most engaging people you could ever meet. He was a piece of work.
Of all the Dutch people my family would find in the U.S. and Canada, Coen Rood was the one with the longest ties. He was two years older than my dad, and here's the significant part: He was my dad's older brother Hyman's best friend as boys. So my dad knew Coen -- Coentje he called him -- practically all his life. 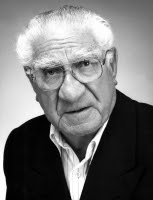