Proud to be an American

Posted this photo of a special certificate on Facebook a year ago today, and it received as much response as anything I've posted. So here's a blog post on it today.
May 23 is a special date for the Van Thyn family. This is the 51st anniversary of the day -- May 23, 1961 -- that our family became United States citizens. 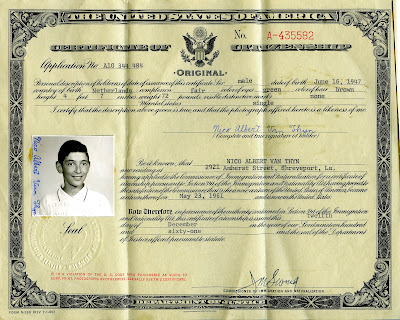 This is my certificate of citizenship. I treasure it.
That day, as I noted a year ago on the 50th anniversary, was one of the great days of our lives. I'll always feel that way.
My parents, my sister Elsa and I were proud to be from Holland. It is one of the two greatest countries in the world. We have lived in the other one since 1956, and believe me, this -- not Holland -- is home.
Just as they were determined to build a new life here, Rose and Louis Van Thyn were determined to pass the test to become citizens of the U.S. They worked hard to learn the answers to the potential questions that would be on the test, just as they had worked hard on their English class lessons when we first came to Shreveport.
Once they past the test -- not that it was terribly difficult -- we went to the Caddo Parish courthouse in downtown for them to take the oath of citizenship. It was a fine moment.
It was easy for me, and for Elsa (age 9). All we had to do was show up. I was 13 -- soon to be 14 -- and an eighth-grader at Oak Terrace Junior High, my first year as a team manager in athletics and my first year as a newspaper correspondent.
Don't remember much about that day, except Wally Hood -- one of my old buddies from the St. James Episcopal Church baseball teams -- reminded me that Mr. Dubose (Bobby Dubose), our coach, gathered the team before practice that afternoon and announced that our family had become citizens that day and asked the boys for applause. Pretty cool.
I can assure you this: If today, I had to study for that test just as my parents had done, I would gladly do it. And I'd pass it.
My mother could sing the first two verses of The Star-Spangled Banner; she could recite Emma Lazarus' poem engraved on a plaque in the Statue of Liberty museum; she knew the whole poem, not just the famous "Give me your tired, your poor, your huddled masses yearning to breathe free ..."
She spoke English fairly well, although she had a Dutch accent. My dad, as many people remember, had a thick accent and mixed a lot of Dutch words with his English. But here's a key element: After a few years when a lot of Dutch was spoken in the house, English became the everyday language; there were only moments of Dutch. More importantly, they thought in English.
I became very aware of this in 1991 when I made my first visit back to Holland since '56, going with my dad. As he spoke with Dutch friends in Dutch, I realized he was mixing in as many American phrases and words as he once mixed in Dutch with his English. And he had to stop to translate his own thoughts.
I have often been asked if I could still speak or understand or write Dutch. Basically, very little. I know words and expressions, but can't put them in a sentence. I understand some of it, if it is spoken slowly and the speaker has an Amsterdam dialect (yes, there are various dialects in Holland). I can read just enough to comprehend a little of what is written.
Let's put it this way: In '91, I tried to tell a security guard at Amsterdam's Olympic Stadium that I wanted to go inside and take a look at the place where I went on my own as a 7- and 8-year-old to watch pro soccer games. The guard didn't speak English; he had no clue what I was trying to say.
I am an American. Like Elsa and my parents, I am a Dutch American, not an American Dutchman. Make sense?
My mother and dad loved this country as much as anyone ever could; they were flag-wavers. They were grateful for the opportunities America provided, and they tried to give back. I feel the same way, and I'm sure Elsa does, too.
Being a U.S. citizen is something I will never take for granted.