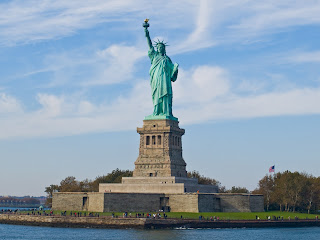 When I placed a photo of the Statue of Liberty with a Facebook post on Jan. 7 a year ago, noting that it had been 55 years to the date that we first saw Miss Liberty from the boat going through the New York City harbor, Jerry Byrd posted a note:
"The Van Thyn story reminds me of the words of the Neil Diamond song," and he added the lyrics  you see above.
We did come to America, and we stayed. It was the trip of a lifetime.
Our story obviously isn't unique -- millions have done it, leaving the "old country" for a new life in the U.S.A. We never regretted it, but I have to think that my parents, through those early days in 1956, must've wondered what they had done.
Why leave Holland, where they'd grown up and lived most of their lives (my dad lived in Belgium for a while before and after World War II), for unseen territory so, so far away, where the language was so different? Why leave what few relatives were left after the war, their friends, my dad's work?
The memories of families lost in the concentration camps haunted them. I think that was a major reason. The war experience was still so prevalent among the Jews of Amsterdam.
My dad had been a streetcar driver for the time I had been alive -- I was 8 1/2 then -- and he was not in line to be promoted. We weren't starving, but they didn't see much opportunity for a better life in Holland.
So, as Neil Diamond sang, did they have "a dream?"  I think the dream was my mother's dream. She wanted to live in Canada or the United States, and that was fine with my dad.
They saw opportunity in North America. But did they really know?
I have to admire the courage it took to make the move, the courage that each immigrant must muster. For us kids -- Elsa was 4 1/2 -- it was easy; we just went along. What choice did we have?
(Maybe I would have chosen to stay where I was. My dad always said that those first couple of months in the U.S., I was terribly homesick for Holland, and for my friends. I don't remember that as an overwhelming feeling, but I suppose I could have been scared and lonely. Looking back, I'd say I was apprehensive but also curious.)
I often have been asked, why and how did we end up in Shreveport? How did we get from Amsterdam to Shreveport, of all places?
The smart-aleck answer is by car, boat and train. The real answer is the Shreveport Jewish Federation, and some awfully generous people in Shreveport.
We needed a sponsor; we needed the money to pay for the trip, for housing, and help to arrange  a job for my dad. Many immigrants had family in the United States (or Canada) to be their sponsor; we didn't.
Working through whatever Jewish agencies in Amsterdam/Holland were handling immigration applicants, my parents first applied to go to Toronto, where they had friends. I'm not sure of the details, but something in my dad's work history wasn't a fit -- and we were turned down.
Nothing against Toronto or Canada, but what a break that turned out to be.
And here's where Shreveport came in. The Shreveport Jewish Federation put together a sponsorship package  A man donated the money to pay for the ship and train tickets, and a three-day stay in New York City; the Federation arranged for housing -- a duplex on Jordan Street, two blocks from the synagogue; and A.A. Gilbert provided a job in his pipeyard for my dad.
(The story goes that Dad thought he would be dealing in smoking pipes. To his amazement, the job was about oilfield pipe. Good story; don't know that it's true.)
In the fall of 1955, I had just begun third grade at the Montessori school three blocks from our tiny house on the west side of Amsterdam, the only house I'd ever known. But we knew we were coming to America.
As I write this 56 years later, I can't stop the tears. My dad must've been right because I still feel the sadness of leaving my friends in Holland, leaving the Dutch soccer team I loved so much, leaving what was comfortable.
My parents must have had that same bittersweet feeling.
We have a short film clip of the start of our trip -- Max Gerritsen's car (he and Marja were like an uncle and aunt to me) -- being loaded for the ride from Amsterdam to the port in Rotterdam. There we were leaving for the U.S. on the SS Ryndam, the Holland-America Line. The next clip, about 10 seconds,  shows us coming down the ramp toward the boat; me (of course) doing the talking.
It was Dec. 28, 1955, our last day as Dutch residents.
Next: What a trip